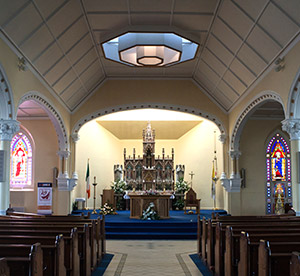 Church of the Holy Rosary, Tullow

In 1798 Bishop Daniel Delaney took, without lease, the ground for the present parish church along with a small house adjoining. The house is now incorporated in theconvent and the lease was later secured from the landlord Mr. Doyne. He built a cruciform church which was completed in 1805. The church was known as the Church of the Nativity of the Blessed Virgin Mary. In 1833 the spire was added by Fr. Nolan, Adm. In 1847 the organ which was in use until the 1970s was built and in 1857 two side altars and the two stained glass windows were installed.

In 1872 Dr. Lynch, coadjutor Bishop of the Diocese, who lived in Tullow, laid the foundation stone of the convent chapel and while it was being built redecoration work was carried out on the parish church. A joint dedication ceremony was per¬formed by Cardinal Cullen on Rosary Sunday, October 3rd, 1875. The parish church was dedicated to Our Lady of the Rosary. The next major work on the building took place at the end of the 19th century when the church was again redecorated and a High Altar of alabaster and marble was erected as a memorial to Dr. Lynch. The altar was consecrated by Bishop Foley on July 1st 1900. In 1905 the original wooden altar rails were replaced by a marble rail.

In 1940 when Fr. Foynes was administrator it was found that the building was too small to accommodate those using it and it was decided to extend the church by building two flat- roofed side aisles. These transformed the building from a cruciform shape to its present almost square shape. Mr. C. B. Powell was the architect and Mr. J. Flynn the builder.

In the 1970s the sanctuary was rearranged under the direction of Mr. Richard Hurley. Fr. Dowling was Administrator and Mr. Jack Halpin the builder. The church was redecorated and rewired at this time. But unfortunately the roof was gradually deteriorating and in the 1980s it became obvious that a major renovation was necessary. The central roof which may have been the much patched original roof of 1805 and the flat roofs of 1940 were all leaking badly. It was decided after much thought and consultation to replace all the roofs with one structure. Mr. Patrick Camp¬bell was the architect and Mr. James Bolger the builder. The result of the work is now to be seen in this renewed building which incorporates walls from 1805 and the 1940 41 extensions. Fr. Peter Dunne, Adm., and Monsignor Brendan Byrne, P.P., have led the parish during this time of sacrifice and renovation.

A new Irish oak altar was installed in 2000 and matching sanctuary furniture and baptismal font in the following years.

In preparation for the celebration of the Bicentenary the Church was refurbished in the Spring of 2005. The interior walls and ceiling were repainted, a new and more efficient lighting system was installed and new carpets were placed in the main body of the Church. Tiles replaced the carpets in the centre aisle and around the sanctuary and the heating system was also improved. A new Baptismal Font was placed in a new open space beneath the gallery. The rails around Bishop Delany’s tomb were removed and the plaque in his honour was placed on the side wall. The plaque in honour of Bishop Corcoran was brought back into the church.

Two new stained glass windows were installed, one dedicated to Bishop Delany and the two Congregations he founded, the Patrician Brothers and the Brigidine Sisters, the other depicts the ‘Mysteries of Light’ and Pope John Paul II. 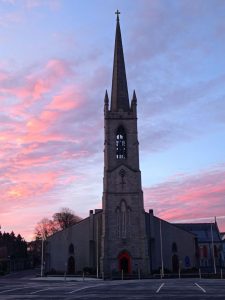 Visit Gallery
Church of The Most Holy Rosary 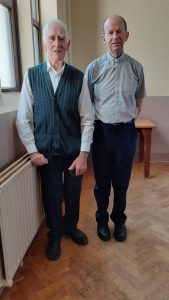 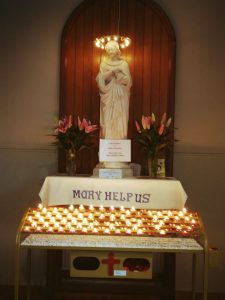 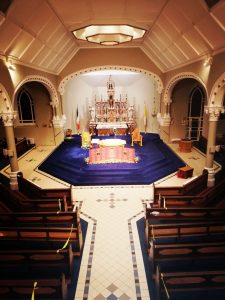